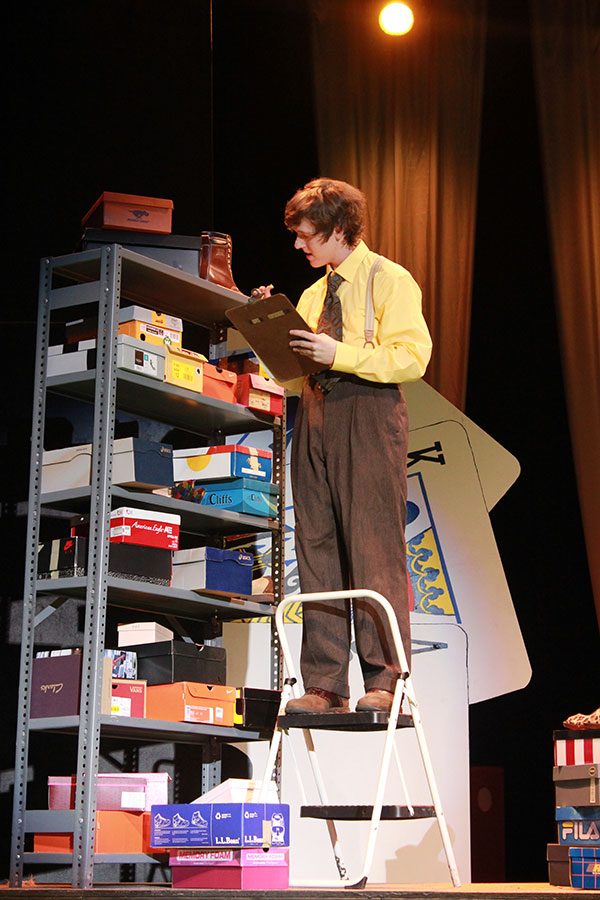 Freshman Rai Angolo recently performed in the spring play “Lucky Stiff,” a musical comedy murder mystery. Angolo spent over two months preparing for the show, where he appeared for his first time as a leading role.

In Lucky Stiff, Angolo plays Harry Witherspoon, a gawky English shoe salesman. His character receives a telegram, stating his uncle has passed away, leaving him with six million dollars and a strange will. Harry must pass on his embalmed uncle as alive for one week in Monte Carlo in order to inherit the fortune.

“I’m just gonna say that it’s really funny, there are some mistaken identities, and it all just goes really crazy and not how anyone planned anything,” Angolo said.

Angolo auditioned in January after performing as an ensemble role in the November musical “Sister Act.” As his first lead role, Angolo dedicated countless hours rehearsing, memorizing and preparing for the role. Between his audition and the final tech week, Angolo made a swift transformation as an actor and singer.

“He’s become a stronger performer and he is really growing and learning how to build the character,” director Michael Parker said.

Angolo had to overcome many obstacles when rehearsing for his role. Whether it was working out his nervous tics, harmonizing or bringing his character to life on stage, Angolo looked to his fellow cast members in order to motivate him. He watched the other hardworking actors and actresses finally perfect something in their performance, which, in turn, got him to where he needed to be.

“I want to be able to have that moment for myself, to have a kind of ‘oh my gosh I understand’ or somebody sees and they think ‘that’s not Rai, that’s Harry,” Angolo said.

Just one week before opening night, Angolo felt a string of confidence for his performance, saying “I think [audiences] should expect a huge, explosive, full of energy opening night because this is the week that everybody is going to be pushing as hard as they can,” Angolo said.

After his performance, Angolo was invited into the thespian society. He feels very strongly about his performance on opening weekend, and is confident that he could take on another big role as a thespian.

“We are all just really happy,” said Angolo, “We worked really hard on this show and “Sister Act” in the fall.”