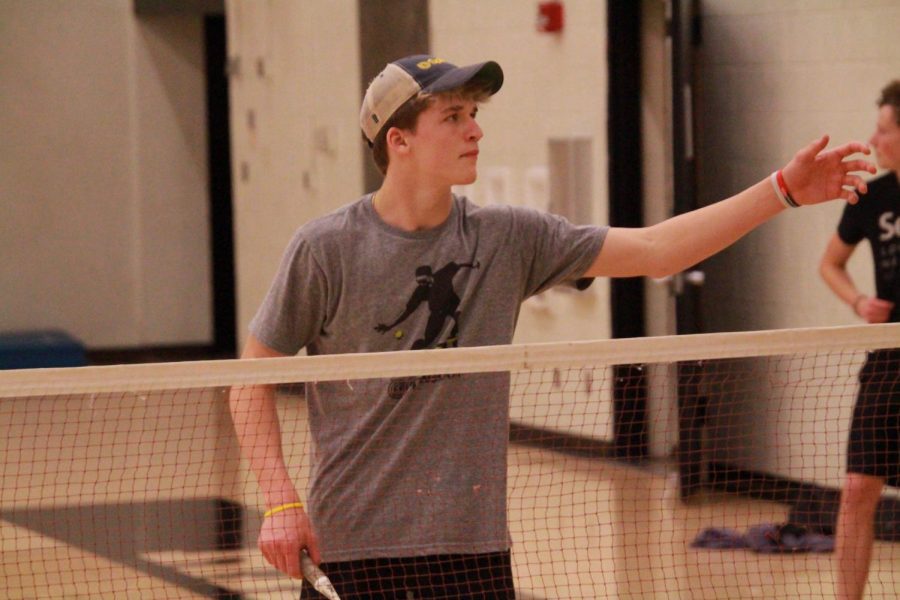 After scoring a point, junior Luke Schmidt motions to his partner.

On March 5, 12 teams gathered for a badminton tournament with a partner of their choice for a chance to win a $20 applebee’s gift card.

“I decided to do badminton because i’d thought it would be fun to hang out with my friends,” junior Makaylee Ybarra said. “My partner invited me so I decided to do it since I didn’t have anything else.”

Starting off the tournament, each team played six games to determine seeding for the bracketplay. The games lasted five minutes and they had to switch corts in the middle due to the elongation of one side.

“I didn’t really phase us, it was just like a volleyball game or stuff like that. It didn’t affect the game,” Ybarra said.

Once the seeding was decided, it was single elimination eight minute games. In the final was junior Luke Schmidt and sophomore Caleb Koontz versus senior Henry Claassen and junior Benjamin Schmidt.

“We’ve prepared for it together by playing spikeball together. We were confident, but we knew we had good competition so it was going to be a good match,” Luke said.

After winning in 21-15, Schmidt and Koontz won the applebee’s gift cards. However, gift cards were also awarded to second and third place.

“I was really happy when we won, we tried very hard,” Koontz said. “It was very fun and I’m glad I won with Luke.”