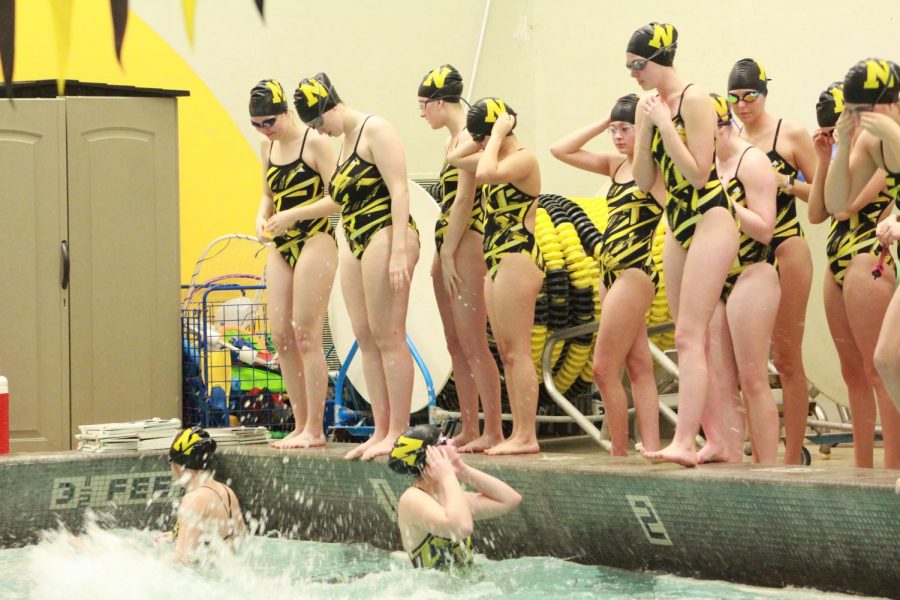 The girls jump in the pool to begin their warm up.

Recently, the girls swim team competed at the state meet, but had to compete against one of their teammates. Due to an agreement between Newton and Hesston, students from USD 460 could join Newton during the regular season, but had to separate for the league and state meets.

“I love everyone on the team and I’ve made a lot of great friendships,” Teeter said.

The formation of the combined team is allowed through a contract with Hesston and Newton.

“It’s something called a cooperative agreement. It’s through the State High School Activities Association and they are an agreement basically where a school that doesn’t have a specific sport can participate in that sport at another school that does,” athletic director Brian Becker said. “We have that cooperative agreement in place for girls swimming with Hesston and Newton, and then we have another one in place for boys swimming with Hesston and Newton.”

Regardless of the contract allowing for the participation of student athletes, there are some limitations. Hesston senior Addi Schroeder could compete and gain points as a Newton swimmer throughout other meets, but at league and state had to compete as her own team.

In addition to only applying to individual sports, the contract also states that this agreement can only be signed by one district for the current school year.

Despite teammates coming from different schools, sophomore Selena Aguilar said she believes that the Hesston students fit in well with the rest of the athletes.

“The team really gets along with them, there’s no rivalry. We accept them for who they are and they’re fun to swim with,” Aguilar said.