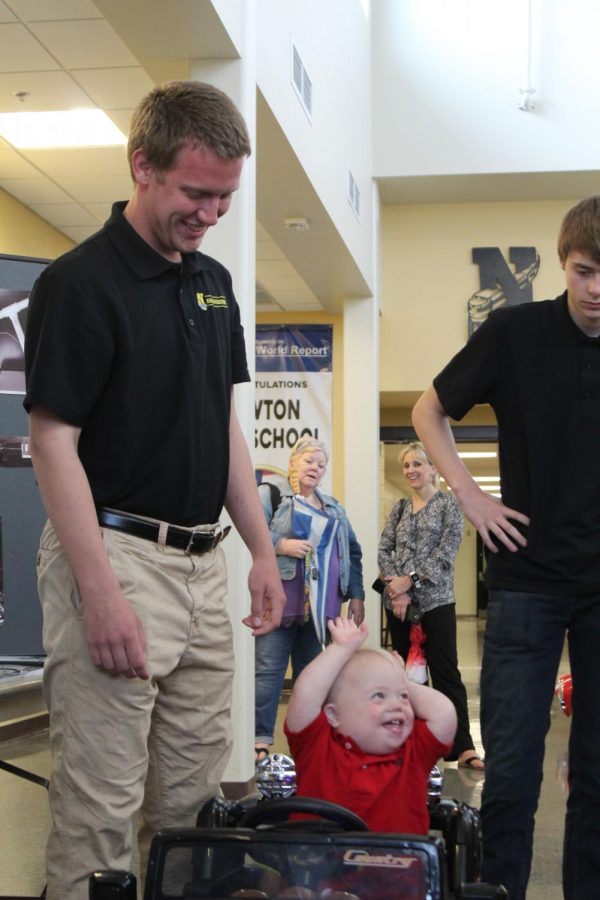 Senior Joel Golubski stands by an watches as a toddler test drives his car.

On May 8, students taking engineering gather in the front of NHS to show off their vehicles they made. These vehicles were made as a therapy device for children with developmental disabilities to make it easier for the child to get around and go from place to place.

“We made a car that works as like a therapy device for the kids. We went through kind of like the whole design process like we did a lot of research and figured out exactly what the problem is we are trying to solve and how people solved it in the past and then we did a lot of prototyping and testing to figure out like exactly how it would work for the kid and if it would and then once we decided that it was a valuable solution, we made the final product,” said senior Tristan Meyer.

Children with developmental disabilities attended this event to test drive the vehicles that were made. As a total, three cars were built for the children by the seniors students.

“It was inspired by the Go Buddy Go program, but it’s supposed to be therapeutic for children with like developmental disabilities. We had the one of the kids over at one point and he was really happy to see it. It was like a rough version but he was like “This is cool,” so that just made us happy. Also, we won and like got third at state in the design competition for this, so that’s kind of a selfish pride type thing,” said senior Milo Jones.

The engineering team took these prototypes to state and finished in third place in the design competition. They hope that these prototypes will inspire and help others to build a well structured vehicle for children with developmental disabilities to be able to use and operate on their own.