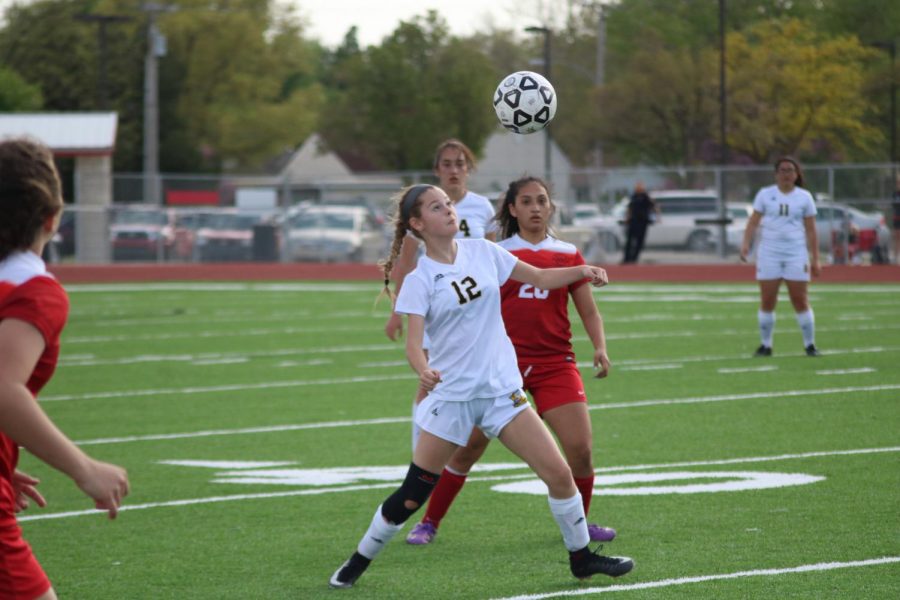 Playing forward, freshman Adeline Tonn heads the ball away from a McPherson player.

The junior varsity soccer girls played the McPherson Bullpups on Friday April 26 at the McPherson stadium. JV got mercy ruled, a 0-10 loss, with only 3 minutes to spare in the second half.

“They’re a really good quality team and they are really fast and aggressive,” Puentes-Solorzano said.

Puentes-Solorzano believes that although the team did well with passes, they need to improve on aggression.

“We got in good passes and we defended not that good but at least we were still there,” Puentes Solorzano said. “We need to improve on pressuring and like being more aggressive. I don’t think we have that much aggression.”

“If it gets past the middle and it gets past you then you have to rely on either the goalie or the other three defenders that are there,” Shoemaker said.

Shoemaker believes the team could improve on communication and connecting passes.

“We talked a lot up top, but we didn’t talk to much in the back,” Shoemaker said. “I’d say we could work on communication and like connecting passes to each other and not just running at the ball. Like ‘Hey you got it’ or ‘you can do this’ you know.”

On April 30, the team will travel to Salina to face the Salina South cougars.